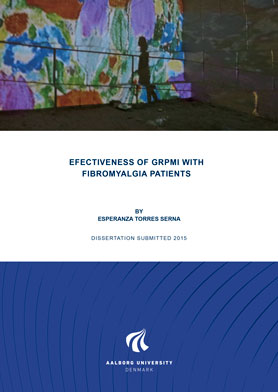 The general aim of this study is to assess the effectiveness of group music and imagery therapy in women with fibromyalgia, specifically, in the perception of psychological wellbeing, functional capacity and quality of life, pain perception, anxiety, depression and anger.

Group Music and Imagery therapy  (GrpMI) works in a holistic way, focusing on the person as a whole, using music as well as spontaneous imagery and the group as therapeutic agents.

The general aim of this study is to assess the effectiveness of GrpMI in women with FM, specifically, in the perception of psychological wellbeing, functional capacity and quality of life, pain perception, anxiety, depression and anger.

The results of the descriptive analyses indicate that 76.6% of the participants have multiple associated diagnoses, of which being the most common is osteo-articular disorders and depression. In addition, participants show low levels of subjective wellbeing, a prominent impact of FM in their functional capacity, high levels of state and trait depression, trait anxiety and a present pain perception above that of the general population mean.

In the intragroup comparison, the experimental group evidenced positive changes in all variables: increasing subjective wellbeing, and reducing the impact of FM in their health and functional capacity, pain intensity, state anxiety, state and trait depression, and state and trait anger. In contrast, the control group did not experience significant changes.

The Reliable Change Index (RCI) showed that, after the treatment, 57.6% of experimental subjects recovered in at least three of the variables and did not deteriorate in any, in contrast with to only 8.7% of the control subjects.

After three months, the experimental group fared better than before treatment with GrpMI intervention, although without statistical significance, except in anxiety.

These results illustrate the effectiveness of GrpMI intervention in FM, as a complementary non-pharmacological therapy. It is necessary to continue research in group imagery and music with a medium- and long-term follow-up, and studies that could evaluate the differential effects of GrpMI elements.